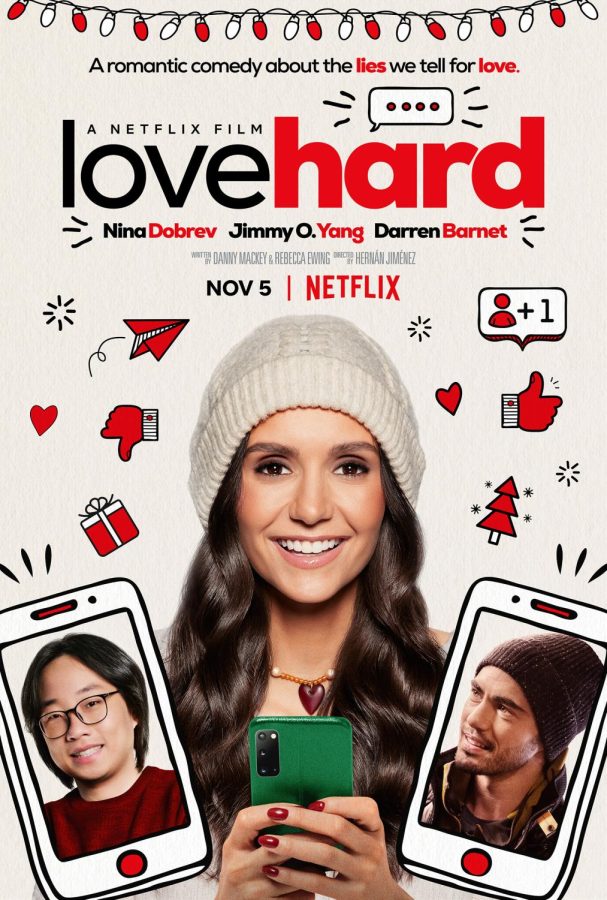 Over the holiday season, everyone is looking for an excellent sit-down movie that will bring joy to their families. A 2021 top #8 movie on Netflix called Love Hard is a great new Christmas comedy I would recommend to people who are into romantic comedies. The movie’s main characters are Natalie, who is played as Nina Dobrev; Josh, who is played as Jimmy O. Yang and Tag, who Darren Barnet plays.

Natalie’s job is to write stories about her lousy love life, but she meets this guy on a dating app and tries to prove to her boss that she can have true love. When she travels to the east coast to meet this guy she has never met, she gets catfished by him. She tries to leave, but then she sees the guy she thought she was talking to, which is Tag. All Josh’s life, he wanted to be his old friend Tag, so he used Tags pictures to try and pick up girls on the dating app. Natalie is upset about being catfished, but Josh really needs a girl to be his date for the holidays, so the two make a deal that Natalie gets help with trying to get Tag to like her, and Josh dates Natalie for Christmas. When the two take the fake relationship too far, the family throws an engagement, and all their lies unfold. But in the end, Josh and Natalie realize they are meant for each other and surprise everyone.

The only thing that I would say I didn’t enjoy is that it didn’t have the Christmas spirit like the other Christmas movies, such as the Grinch and the Elf.  When I’m looking for a Christmas movie, I want it to be similar to those classics. Also, when I watched Love Hard, it reminded me of the typical hopeless romantic movies that we all can easily predict. Even though Love Hard had differences from some, it just reminded me a lot of them.

Overall, I recommend giving this movie a try with your family or friends during the holidays if you don’t want to re-watch the classics. The characters gave the film a lot of great turns of events, but the movie was predictable. Also, the movie tries to relate to modern-day events like dating apps and rock climbing which made it more interesting.