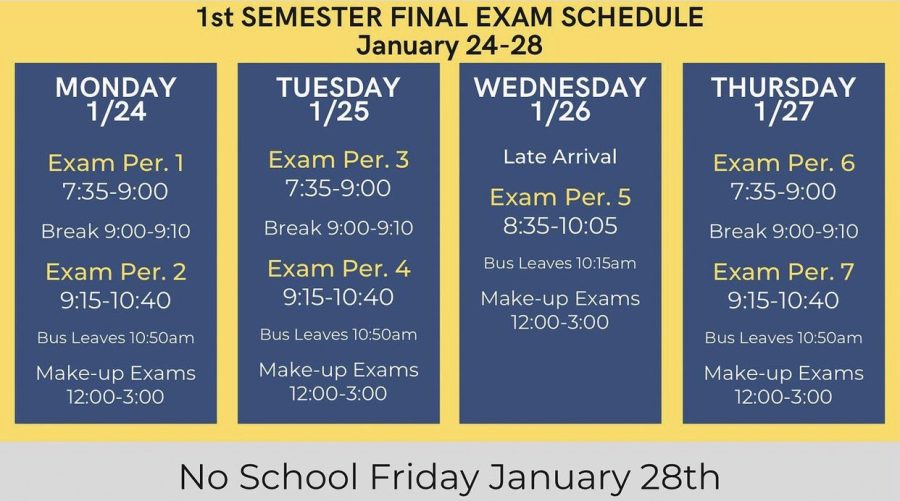 As the end of the first semester approaches, Barlow students have been preparing for the week of finals. Whether that is studying for an exam, finishing up a project, or writing a paper the week of January 24-27.

Staff members typically use the week before finals at the end of the semester to have their students understand and grasp the criteria needed to take the final. Senior Lucas Craft states, “the week of finals is usually very chill.” Students only have two periods a day, while Wednesday, a late start, is only one period. Classes are divided into 85-minute increments, and students are sent home at the end of their second class period around 10:40 a.m. “After all your finals for the day, you have time to go spend time with friends or go home and relax,” Craft explains.

Previously, after not being able to have a regular finals schedule due to COVID and being online, senior Marlene Lopez explains, “I am kind of nervous for my AP Calculus final since it’s the first time in two and a half years I’ve been in a serious test-taking atmosphere, but other than that, the flow of test-taking is smoother in-person.” If some students feel that they are not prepared enough for finals, some tips Craft gives is to “communicate with your teachers to make sure you are studying all the right material. Also, get good sleep every night the week of finals, so you are well rested for your tests.”

Recently, rumors have spread amongst students from other students and staff that finals would be online due to teacher and substitute shortages, which is false. Finals will continue to be in person for the 2021-2022 school year. A few Barlow students believe that taking finals online is better than taking them in-person because “most classes aren’t having a final or already had it, so there’s no reason to be in class.” “Less pressure.” “Teachers are more lenient, more understanding, and less homework making it easier to study.” Other students believe that in-person is best since many individuals struggle with finals, especially when they can’t get a hold of teachers’ help. An anonymous source mentions, “going back to online ANYTHING would be awful especially because it’s hard for some students mentally with being isolated at home and away from physical interactions.”

All in all, as the first semester comes to a quick ending, students are now halfway through the school year, so don’t give up now! Craft says, “good luck, and don’t stress too much.”