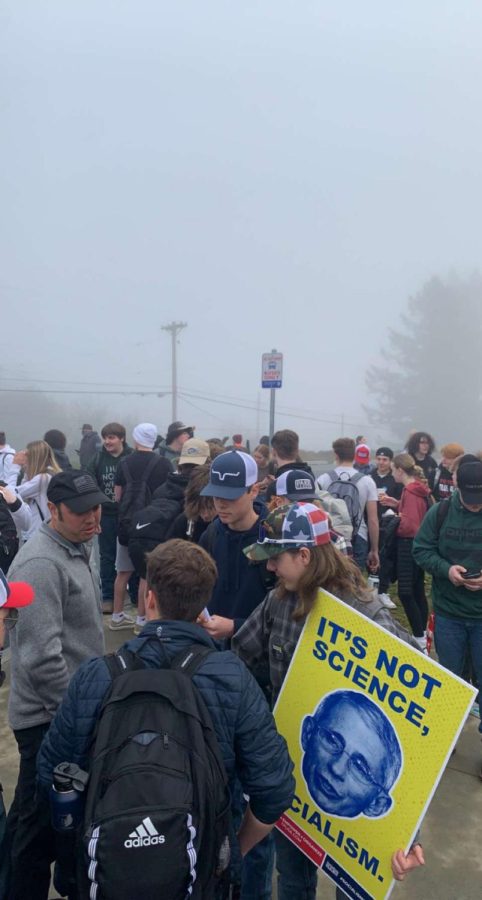 On Thursday, February 10th, a protest broke out outside the school. This was led by some students and parents protesting against the mask mandate. There was a picture advertising the event going around for a couple of days beforehand, and people had been removing their masks in the halls and classrooms. Students had tried to walk out on Tuesday, but the teachers had enforced the mask rule, and there wasn’t enough support for these students. Some students had reached out to @freeoregon, a local Republican Instagram page. The account responded and showed up at the protest later that week. During the day of the protest, the students participating went outside at around 8:30 AM where they stayed for the most part until lunch, and more students went out for the hot chocolate and to skip class. Some students who went out were messing around with different signs saying random statements including, “Why is cheese so expensive?” Among these counter-active signs were posters with the general message to “wear a mask.” Some students outside started asking the protesters random questions and were met with hostility, including racist and homophobic slurs. Since then, there have been parodies of pictures of these protests, including pride flags and Black Lives Matter flags being photoshopped over the anti-mask and American flags.

What do students think of this protest? On one end, some students believe that this protest should have happened.

“I think it is something important that needs to be talked about, because if most public places aren’t requiring people to wear masks, then why should we have to wear masks at schools, or just make it optional for people to wear one,” says sophomore Bonnie Brill. She also believes adults had the right to show up to the protest, but only if they were respectful.

“The protest wasn’t really about banning masks from the school,” says freshman Vanessa Kelley. Another freshman mentions, “It was supposed to be a high-schooler-led protest, and I feel like having adults there made it seem like something less. It was like we couldn’t do it ourselves and that the parents had to help us.”

On the other hand, some students believe that this protest was useless, including sophomore Shaylee Castro.

“I went out to the protest because I heard that there was hot chocolate, and I didn’t want to go to advisory. Half of the people that were there weren’t there to support the mask protest; they were just there to get out of advisory.” She thinks people who think the mask should come off are selfish because they aren’t considering other people’s health. To the protestors themselves, her message is to, “bring back the hot chocolate because it was really dank.”

“There were a lot of anti-maskers. It was very distracting, and we got no work done that day,” says sophomore Jeremiah Fleurimond, who further mentioned, “it should’ve happened off of school property.”

There are a lot of mixed feelings on this issue, but as a community, we’re just going to have to be patient and wait it out together. There’s an end in sight, with the mask mandate potentially being lifted by March 31st, and we can make it!