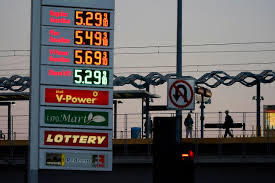 Gas prices are at an all time high

Each year brings us new surprises, and 2022 has people hiding their wallets from gas stations. Gas prices have gone up an enormous amount over the past three months, but why?

One of the two main resources for oil has been cut off due to the war between Russia and Ukraine. Our ability to get the amount of oil we need as a country is very limited because Biden stopped getting our resources through Russia. With the low supply of oil, it costs more to supply and market which causes  the prices to go up so that the providers for the oil will continue making money.

If a worker earning minimum wage were to fill a 12-gallon tank of gas today, it would cost an entire day’s worth of pay. After everything goes up in price, especially gas, the minimum wage stays the same. At least in Oregon, it has stayed the same at $14.50 per hour, depending on the location in the state. People are really struggling with everything because most jobs require you to drive there but with minimum wage staying the same as gas prices going higher and higher people can barely afford to pay for a full tank of gas.

Lets just hope that gas prices will go down sooner rather than later. People are already trying to stay off of roads, or are going to certain gas stations to get a lower price on gas. Citizens are hoping that these prices won’t last forever.